»Isolation Unit (…) was performed in a small, empty, coal storage room. We worked simultaneously, although independently, but frequently came together, particularly in relation to sound. The materials Beuys used were: his felt suit, a dead mouse*, a silver spoon, a small silver bowl, a reel-to-reel tape recorder and a „passion fruit“. I used a candle, a window with four panes, two iron pipes: one very long and one vers short, a napalm like substance (cooking jelly), and a light bulb suspended just off the floor.

During the action, Beuys gave the mouse a ride on the recorder and moved very slowly about the space with the mouse in his hand. I formed the jelly into a cross on the floor in front o the window and lit it on fire, smoking a cigarette without inhaling as the jelly burned behind me. Then I played the pipes by first striking the long one against the floor to create a deep, resonant, bell like tone, and then striking that pipe with the shorter one to cause double tones. Finally I moved to the window and, using the sound waves emanating from the pipes, searched for accoustically dead spots in the glass. When these were found, the glass was shattered with the pipe. As this was happening, Beuys stood still and stiff and slowley ate the fruit with the silver spoon. The small silver bowl was placed on the floor between his feet, and as he ate the fruit he allowed the seed to fall into it, one by one creating a high ringing sound.«

*For Joseph Beuys Isolation Unit acted as a requiem dedicated to a pet mouse kept by him for three years which had just died. It was the only event in which he wore his special felt suit (a Galerie René Block multiple). 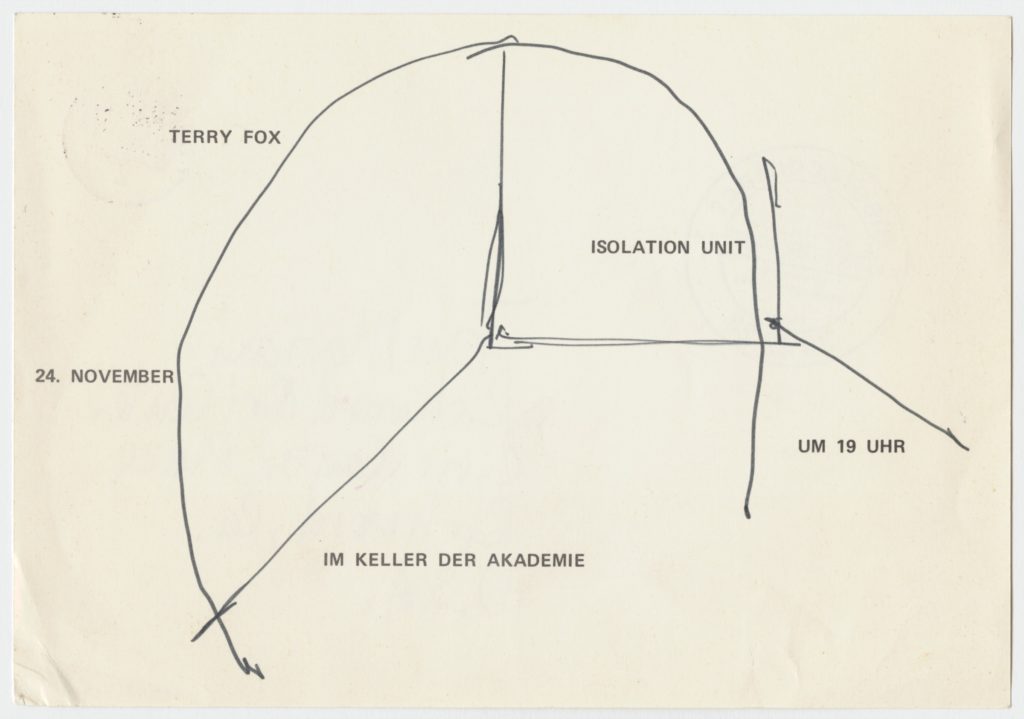 Fox and Beuys preparing the action in the afternoon on Nov. 24th, 1970

»This textual mirrow was created as a hommage to Jospeh Beuys, who died in 1986. When Fox, living in Florence at that time, heard of Beuys’ death by chance on Italian TV, he spontaneously decided to produce „a kind of tombstone“ with the found mirror. Fox’s text was inspired by Beuys’ perfromance Ja, ja, ja, nee, nee, nee (1968), and written in the form of the arms of a cross set around a central square. (…) the first sentence is taken from a postcard Beuys sent to Fox in 1970 (…) the other sentences are decontextualized fragments of presumably other letters or conversations, including:

The sentences form strings of words divided into thirteen lines each with eight letters. They are read in a clockwise direction, as is the central helix. In contrast, though, the engravedd square in the center is divided into 64 smaller squares matching Beuys’ age when he died. Each of the smaller squares is marked with dots, with each dot representing a year of Beuys’ life. The dots in the spirally arranged fields gradually increase and become denser, leading in the end to an artistic and sculptural resolution. According to Terry Fox, the center „becomes a window through the mirror“, and so symbolizes Beuys’ death.

The design brings together two artistic principles that Fox had alraedy employed in earlier works: on the one hand, the performative quality of the labyrinth and, on the ohter, the mirror’s appelative quality to draw viewers „into“ the work.«