»Given the degenerative state in which we find ourselves,
one must once again allow the metaphysical be absorbed
by our sensibilities via the skin.«

Even before he briefly moved to Paris from 1967-68, where he participated in the May ’68 student protests, Terry Fox had already discovered the work of the French writer, artist, actor, and theoretician of the theatre, Antonin Artaud.

The enduring influence Artaud had on Fox’s artistic language is particularly evident in the artist’s early actions, in which he used his own body as a medium of experience and expression of physical and spiritual qualities. To transcend the physical limits of his body, Fox worked with: energy transformation, sleep, dream, fasting, levitation, music, chanting, hypnosis, automatic writing, chance, hallucination.

»In Artaud’s writings, especially in the Theater of Cruelty, the artist finds fundamental ideas of his understanding of the possibilities of art preformulated. Art, which had renounced the representation and reception of exclusively elite groups, should be accessible to everyone, as in the case of the latter, and should be able to be experienced as reality due to its direct, physical effect. In their physicality and universal linguisticity, actions, performances and movements in the context of body and performance art appear to be adequate means of expressing the existential energies, vibrations and excitements of the human being.«

» [Robin White]: When did you do your first performance?
[Terry Fox]: I did public theatre, but those weren’t really performances, they were – street situations. That was in 1969 – I did one a month, and I just made announcements, printed them myself. (…)

[RW]: So, who came to them? Who did you send the announcements to?

[TF]: I just put them up all over, stuck them up on walls, especially down South Market, where I was. All along Third Street. Mostly just friends came. I sent some to people that I admired – artists here and in Europe. For instance, I sent Beuys every one of them. So, when I met him, he sort of knew me, already, although I hadn’t really done anything in a gallery. In the one in Anne Halprin’s studio, one of the chief dancers. Patrick Hickey, took over and they did whatever they wanted. I didn’t have any control But there was one that I set up – the one where I transposed a blind lady from Market Street to Union Street where she sang and played her accordion in front of a huge construction pit, from sunset until dark. The first performance I did as an art performance was at Berkeley in 1969, for The Eighties show at the old Berkeley Museum. It was the defoliation of the jasmine plants.«

Theater of the Streets (Manifestation 1)

Theater of the Void / What Do Blind Men Dream?
(Manifestation 2)

»Terry Fox: The last one of this series was in Ann Halprin’s studio where I used to be around at night for improvisational movements, just for myself. So the poster just said ›At Ann Halprin’s studio at a certain time‹ and so on. Later I changed from doing posters to making performances myself. 1970, Tom Marioni who was at that time a curator at the Richmond Art Center invited me for a show there. He liked what I did. And I did Levitation, which was my first solo exhibition.«

»Fox created a work, in the form of an oversize book, an ›illustrated Artaud‹, initialed Terry Fox / A.A., which has as its cover an x-ray photograph of Fox’s wound, and is composed of xerox prints of Fox’s hands spelling out words in deaf-mute sign language, page after page of Artaud quotations typed and illustrated with proof-marks in Fox’s hand, interspersed with pages of Fox’s own journal notes, and photographs of Artaud and Fox. This book was compiled by Fox during stays at U.C. hospital between August of 1971 and January of 1972.«

Untitled
(I have an open wound …) 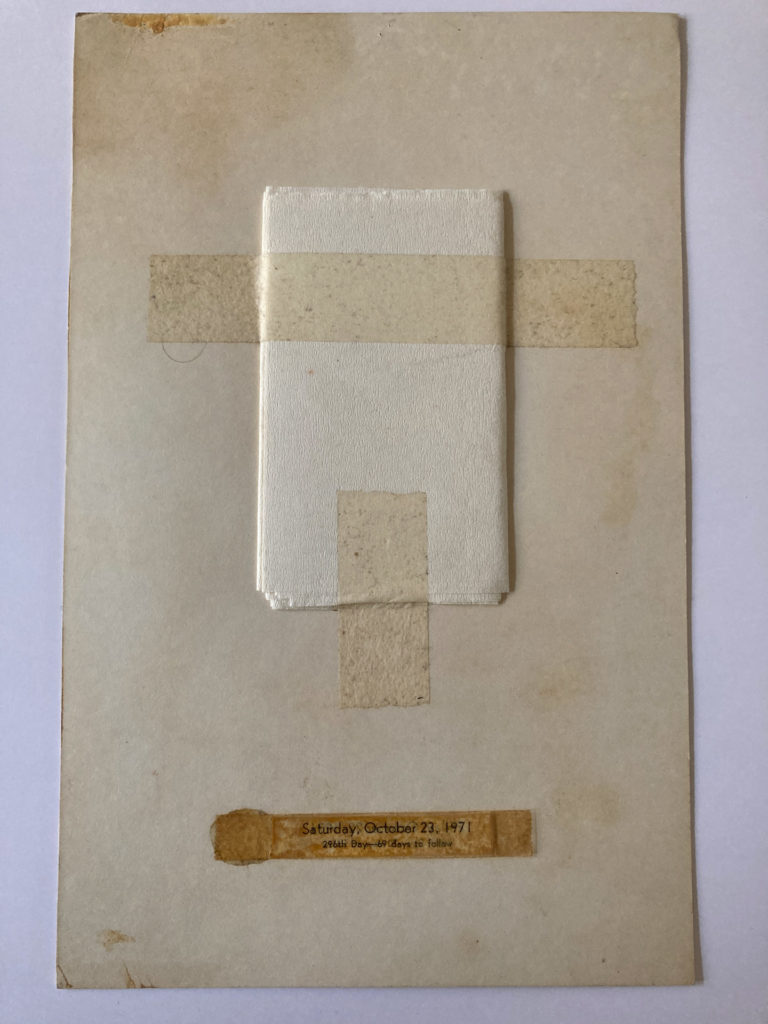 Text:
»STRANGE DEFEAT. HOW TO GET AWAY? QUICK, THE EYE OF A NEEDLE! THE SMALLEST NEEDLE’S EYE, SO ABELARD WON’T BE ABLE TO COME LOOKING FOR US. HE RENOUNCES THE CHASTE COITUS PERMITTED BY GOD.«

»The text is a quote by Antonin Artaud, taken from the book ›Artaud Anthology‹, City Lights Press, San Francisco. The text, entitled ›Transparent Abelard‹, is on page 53 of this book. I have used texts by Artaud in many pieces since the seventies. This is the latest and probably final one. The quote is laid out on a grid of 143 squares drawn on a sheet of heavy paper. The paper is twisted into a cone shaped form with a needle inserted in the small end of the object. (…)

I found the way to fold the paper into this shape in an old book that I have on geometrical experiments. It was a way of folding the paper into a cone shape where the squares followed one another in a spiral around the cone, so that the text could be read from the point all the way to the bottom in a linear order.
This idea enabled me to give the text a physical body by combining its two-dimensional structure with the three-dimensional form of the cone through the spiraling order of the words: an instance of the body recoiling-in upon itself, like the cone torqued, or twisted on itself to make the strange shape of this textual sculpture.«